Huddled in a Basement

Overheard in a Minivan

Picking a fight with dad, Attempt the First:

"Dad, are you thinking about buying a motorcycle now that gas costs a lot?"

"Not really. It wouldn't be much use in the winter here, and that's when I have to drive the most. Maybe if we lived in Florida or south Texas."

"Mr. Johnson* has a cool green motorcycle. Why can't you be more like Mr. Bliss*?" (I don't know where that came from, either, folks, I'm just the scribe)

"Yesterday you told me you hated Mr. Bliss because he said that fight was your fault, remember? You don't like him anymore because he held you responsible for what you did."

"Well, I didn't really mean that!"

"Yeah, well, I figured you didn't really mean it, but you said it so you have to deal with it.. And if I act more like Mr. Bliss, I have to act less like myself, buddy. I'd rather be more like myself."

Picking a Fight With Dad, Attempt the Second:

"Dad, when you were a kid, did wish sometimes your friend's dad was your dad?"

"Uh, if I understood what you just said, then no. Why?"

"Because, whenever he gets in trouble, his dad just comes in to the school and he always makes sure he gets him out of trouble."

"Yeah, well, I don't want to be teaching you right from wrong when you're 30, so I'm getting it out of the way now."

Picking a Fight With Dad, Attempt the Third and Final:

"You know, it's not fair that Donovan gets-"

"OK, now it's time for you to be quiet until we get home."

"That's not quiet. You are being the opposite of quiet."

*Not real names of Kane's schoolteachers. They've put up with enough for one year.

Indeed it is, Ms. Peeler. Indeed it is.
(Names were not changed to protect the innocent. She paid good money to have her name published in the newspaper. We're saving her reputation here!)
Posted by Don at 10:02 PM 1 comment:

Bear with me, here, folks

Updates are coming, but at the moment I'm swamped. I have several things about which I want to write; a good man's death, the end of another school year, home repairs in the Bathroom of Doom . . . . but right now, I'm getting up, going to school, coming home to do family stuff, and then learning plumbing by trial-and-error until around midnight. Right now I'm at school with 9 more end-of-year reports to generate before I can finish packing and go home, and I've set a goal for myself: I'd like to get everything done and go home at the time the students would normally be dismissed. Wish me luck.
Posted by Don at 10:09 AM 3 comments:

Overheard in a Classroom . . .

Those lovable scamps are at it again.

Now, as per Armed and Safe, Days of Our Trailers, and the IllinoisCarry forums (I'm a day late and a dollar short as usual) comes this tale of ineptitude. You see, the Brady Bunch and their friends in the "Freedom States Alliance" (total membership: 27) wanted the usual Daley list of gun control bills for Illinois to pass in the worst way. Unfortunately, Daley proposes these bills every year, and they lose every year. This year, gun owners called, faxed and emailed legislators in a flood of public opinion which, combined with having 2500 fed-up citizens show up to lobby on a work day, convinced the Capitol that voting for gun control is a bad idea. To the anti-gun lobby, that seemed like a dirty trick--how dare ordinary citizens call their representatives and tell them how to vote?!?

But dare we did. So now they're trying a new tack: copy the tactics that work. They're sending out postcards and making robocalls to voters in two key districts, pleading for voters to call the representatives and "tell them they voted wrong on HB758." Well, HB758 would have outlawed private handgun sales (such as they are in Illinois, where you must retain a record of the other guy's FOID card for ten years and the 3-day waiting period applies to private sales) so as it turns out, a LOT more people are calling to thank the representatives for their votes. I just called, and Representative Sandy Cole's secretary is having a good chuckle over all this. There's no one answering the phone at Representative Reboletti's offices, so I'll be sending a fax in a moment. In any case, from what I hear, Rep. Cole's office is getting five pro-gun calls for every one anti-gun.

Brady Bunch, what did you expect? You have no popular support. You raise tiny amounts of money. You can't do anything on a grassroots level. But you've seen us do it over and over again. You've seen how we get hundreds of phone calls to any legislator who needs to hear from us. You've seen 2500 average people take the day off from work and travel to Springfield at their own expense to oppose you. You know how many millions the NRA raises from donors who give less than $200 apiece, while you grovel in front of George Soros and the Joyce Foundation for the funds to keep the lights on. How do you see all that happening right in front of you and still not get it? This was no more than a tantrum on your part. It might have felt good for a moment, but you knew from the start that it couldn't work, and now you're worse off than you were before.

For your own good, Brady Bunch, seriously, just pretend Winnebago County isn't there for awhile. I don't know if your poor hearts can handle what's going on up there.

When Charlton Heston died nearly a month ago, GunGuys wrote a commentary respectfully recognizing his passing.

Well, on the one hand, I didn't recall that. But on the other hand, I probably read about one of every ten emails the Gun Guys send me; they tell grand lies and they don't respond to critics, so there's not much point for an argumentative guy like me. So I went to their site and looked for the respectful commentary. Here it is; I'll let you decide for yourself whether this constitutes respectful commentary on a man's death:

Although GunGuys adamently disagreed with Charlton Heston's pro-gun views, as word of his passing emerges, we would like to offer our condolences to the Heston family.

Heston stepped down as the chief shill for the NRA a few years back after he developed Alzheimer’s, a horrible disease.

We have to be honest, however, in saying that while Heston served the NRA, our country was not served well. His fiery advocacy for a mythic view of guns as sacred objects was a success, to a great degree. He helped create the post-millenium image of the gun lobby as invincible.

Like his Hollywood roles, the strength of the gun lobby is more based on public relations than reality – and that has had a harmful impact on public safety in America.

The individual ownership and largely unregulated sales of guns in America does not strengthen our liberty, as Heston contended, it limits it. We have less freedom when we are a nation armed to the teeth, because we cannot breathe the bracing air of feeling secure on our streets and in our homes.

When a person dies, we think of the best parts of their life.

For Gun Guys, we prefer to remember Charlton Heston as Moses. In that role, he led his people into the Promised Land, instead of into a gun shop.

Don't get me wrong. I don't expect respect from the Gun Guys; that's not their schtick. I guess it just struck me funny to see them bring up the idea of being respectful. And then I had an even funnier thought: What if they thought that was respectful?
Posted by Don at 6:14 AM 1 comment: 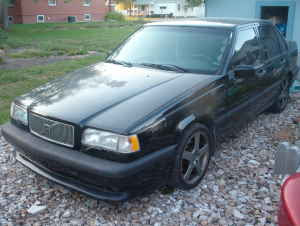 Kids, this is a 1995 Volvo 850 T5-R. It has four doors and many airbags. It is a front-wheel drive family car with a spacious trunk, and it gets about 28 mpg on the highway.
It also has a 240-hp turbocharged 2.3-liter 5-cylinder engine. It has fewer miles and is in much nicer shape than the much despised 1995 Camaro I currently drive, which has a loud but gutless 3.4-liter V6 that only made 160 hp and has never heard the word torque, along with two ridiculously long doors and no interior space. I trust that, by now, it is clear what must be done. The T5-R is located one hour south of me.
Your mission, should you choose to accept it, is to feed me a line that will convince my wife that this is the perfect family car for us. She reads this page regularly, so extreme caution is advised. Good luck to us all.

Email ThisBlogThis!Share to TwitterShare to FacebookShare to Pinterest
Labels: Family, Seal of Approval

. . . . super hero movie of all time?
Signs point to yes. Every geek I know is itching to see this film. Perhaps more importantly, National Public Radio reviewed it this morning . . . . . and they hated it. This is a very good sign.
Specifically, the reviewer said the film is fractured by the many sides of Tony Stark. He's the charming billionaire, but he's also the grim captive of jihadists and then the all-powerful do-gooder.
Spoken by a guy who never liked the character of Iron Man in the first place, buddy. I mean, I'm no botanist over here, but I would have thought that it was kind of important to show Tony Stark with a multi-faceted personality, with some of the facets conflicting with others. That's kind of the point, genius.
As a matter of fact, maybe you've heard of other characters written in a similar way--Dr. Bruce Banner, for instance, or Clark Kent, or Peter Parker? Bruce Wayne? They all have somewhat fragmented personalities because they are--and this is sort of a central part of the superhero genre, so pay attention--people who lead two or more completely separate lives. Generally, they have their super hero personas, and then they have their "secret identities." It's a little like violence in a gangster movie--you don't have to like it, but I expect it.
Posted by Don at 12:05 PM 6 comments:


That's the best of both worlds: funny and painful.