Is that the one with the DeLorean?

Ess You What Huh What?

I have issues. Issues I got from the internet.

I started a new job a few days ago, and the day after I brought in a box of breakfast granola bars, ate one, and left the rest in the kitchen, people apparently ate the rest and threw the box away.
That's not the issue . . . the issue is that I caught myself thinking of writing a really passive-aggressive note about it, but decided not to bother because my phone won't take a good enough picture to be legible on www.passiveaggressivenotes.com.

Also, the school district that just hired me uses Macs exclusively. My classroom machine is a big white EMac. Everything about it is backwards and wrong.

Yo, dawg, I heard you like it when yankees get all unhinged about snow, so I got you a unhinged yankee Senator babblin' about snow.

Of course, Senator Durbin's not even from Chicago. I believe he's from East St. Louis, and nowadays he lives in Springfield. We get snow here, of course, but it's not like Chicago.

. . . . down the street from the Illinois Capitol in Springfield:

Veteran Politico: "Okay, tell me how you win Mcdonald. How do you lay out the argument that wins Mcdonald for you?"
Chicago City Attorney: "Honestly? I don't see any way."

Hearing a Chicago attorney admit they're likely to lose McDonald v. Chicago in a big way is like hearing your wife say she loves you. Sure, it's nothing new, and maybe she thinks it should go without saying, but it's still nice to hear it out loud. 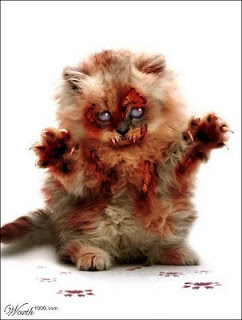 Illinois handgun dealer licensing bill is back from the dead . . . again.
Now, no one get too alarmed, but it does seem that zombie gun control bills are beginning to rise from the dead in Springfield. The first lumbering corpse to claw its way out of the cold, mossy ground of the legislative cemetery known as the Rules Committee is House Bill 180, the "Handgun Dealer Licensing Act. This is the same bill gun owners have been stopping for years, over and over and over--but it always comes back. Normally, that process takes time, as a bill that went down to defeat in a floor vote the year before must be re-introduced and go through the committee process again before reaching the floor--which is why the Senate version of this same bill, SB3092, is some time away from a floor vote; it had to be introduced anew just this week. However, there was no floor vote on HB180 during the 2009 session, so it went back to the Rules Committee . . . which sent it back out to the floor late last week. That means that a floor vote could be taken at any time. But what would HB180 do that would lead gun owners to call their legislators in opposition?

Posted using ShareThis
Posted by Don at 2:06 AM No comments: Links to this post

Hey, Scott Cohen--don't sit with your back to any doors.

Now at least one political authority in IL (Archpundit) is calling for Quinn and the Democrats to put Dan Hynes, the guy who just spent six months feuding with Quinn and shredding him in an attempt to take his job, in Cohen's place as candidate for Lt. Governor. But here's the catch--even if Quinn is that statesmanlike, they can't remove Cohen. He won the election. He either steps down voluntarily, or he's in the race. And he doesn't owe anyone in the Democrat Party any favors . . . . I'm considering a grassroots campaign of support for the guy.
Posted by Don at 12:34 PM 3 comments: Links to this post

Gannon is a former steamroller operator for the city of Chicago.

Even as Gannon collected a city pension based on his Chicago Federation of Labor salary, he was able to continue working for the CFL, which, according to the most recent records available, paid him $215,484 in 2007.

He'll just have to try to scrape by, poor dear. Notice that he's not exactly being accused of anything here, because there's no dispute that the law allows him to collect that money. The city of Chicago pays him a pension that's probably double what he made working for them, because they pay him a pension based on what he made working for someone else.

Posted by Don at 11:24 AM No comments: Links to this post 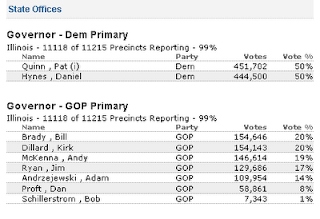 The short version: There were two mildly anti-gun Democrats running for Governor of IL, and they tore each other up, ending up about 7,000 votes apart. Their race is probably over, but it was fun while it lasted, featuring Democrat gems like accusations of racism from both sides over the Dan Hynes ad that featured former Chicago Mayor Harold Washington explaining why he fired Governor Quinn from Chicago city government in the 1980s. Why is that racist? Well, it's old video! Harold Washington is dead!
Still not racist? Well, Harold Washington was black, and it's either racist to feature a dead black man in your commercial (even if he was a unique authority on your opponent and no one disputes that his comments are being used in context) or it's racist to criticize a commercial with a dead black man in it . . . . depending on which side you want to win.
Anyway, the spectacle last night was fantastic, with Quinn declaring victory at about the same time Quinn was vowing to fight on "until tomorrow," perhaps unaware that it had already been "tomorrow" for about half an hour by that time.

In the GOP race, everyone knew that it would come down to a showdown between Kirk Dillard, Andy McKenna and Jim Ryan (Dillard is the only pro-gun candidate in that troika.) Fiery Tea Party newcomer Adam Andrzejewski (An-jee-EFF-ski) was considered a possible spoiler, having lots and lots of Facebook fans and having gotten a late mention from Rush Limbaugh himself (tranquilizers be upon him.) But someone forgot to tell Bill Brady, the only candidate other than Dillard with a pro-gun voting record (arguably a stronger record than Dillard's, but not by much.) At the moment, as the candidates are sitting down to the GOP's "Unity Breakfast," Brady and Dillard are locked in a virtual tie for first place. With 97 precincts still unreported, Brady holds a lead of 503 votes. It's anybody's ball game, and a recount is almost guaranteed, but for Illinois gun owners this is a battle between a great candidate and a splendid candidate.

Every month, the Sangamon County Rifle Association gets together in the back room of the local buffet place. Somebody stands up and talks about the politicians, somebody else updates everyone on upcoming gun shows and demands volunteers, then someone stands up and talks about the damn politicians, followed by me standing up and droning on about McDonald this and Heller that and honestly, I'm not sure I could tell you everything I talk about.

But generally, someone brings in something to show around for "Tech Time." Tonight, Brent the Token Soldier brought in his Makarov. I'd never held on in my hand before, and now I want one. But I won't likely find a deal like the one Brent got; about ten years ago, he found this one at a household auction for $50. Fifty dollars. No kidding.

Brent's Makarov is an East German version of 1964 vintage, and it's a lovely little thing. The finish is a deep, nearly-black bluing on well-polished steel. The pistol is tight and solid, larger in the hand than I expected, and heavy for its size (well, by my standards, but remember that I was six years old when the first Glocks reached the U.S. People my age don't remember when guns could only be made of steel.) Throughout the gun (and on each of the magazines) most of the parts had been marked "48" with an electric pencil. In Corvette terms, this is a numbers-matching Communist oppression pistol.

Did I forget that part? Yes, under the grips of this elegantly simple little pistol are the markings of the East German Stasi--secret police.

I know there are people who can't stand to hold a Nazi-marked K98 or Luger, and would view this pistol the same way. But I can't hold a milsurp and keep from wondering what the original users would have thought of someone like me holding it. Tonight I had to wonder; could the Stasi agent who carried good old No. 48 have imagined that someday, maybe 30 years or so in the future, "his" issue pistol would be carried and plinked with by some American soldier on his own time?