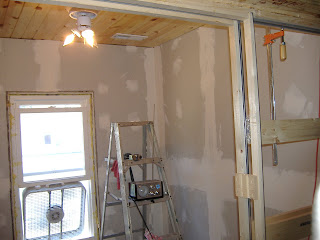 When last we discussed The Nursery, it looked more or less like this. Then I started scraping and sanding drywall. And scraping. Then sanding. Then putting up more mud, since I'd ruined it . . . . and then scraping, and sanding, and quitting, and wishing I'd never started. Drywall finishing is an art, and I'm not the artistic type. If I can't construct a jig or use a straightedge to make it happen, it'll probably look like I was drinking when I made it. Finally, I just decided that the perfect was the enemy of the good and set out to do it all one more time and then paint no matter what it looked like. Of course, what some of you old hands already knew is that you can't judge the wall by what it looks like without paint or trim, which leads us to the current photos: 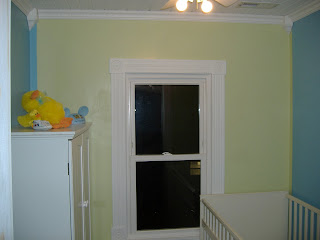 This is what the north wall looks like now. The window turned out better than I expected. If you look very closely, you can see that the window is not quite aligned with the trim work. I can see it much more clearly in real life, but no one else has commented on it yet. The choice was between making the window work in the opening or making everything square, and I went with function. Then the choice was whether to skew the trim the same way to hide it, but it seemed simpler to make the trim level and get over it, so I did. The corners aren't perfectly straight, either, and never would have been, so rather than give up on having multicolored walls, I moved the transition two inches or so to the right in each corner. That let me use a laser plumb to make them just right, and you have to look closely to see that the corners aren't square since both sides are the same color. All in all, not bad. My grandpa taught me long ago that the difference between a professional and an amateur is that the professional knows how to hide mistakes. Grandpa was a pipefitter by trade, so that might not have been the healthiest attitude for him to have, but it's working for me so far. 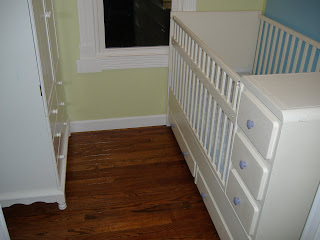 Here's the floor, which also exceeding expectations. Way to be, floor! Most rooms in the house started life with really nice hardwood floors, but were covered with cheap carpet at some point. Then, as nearly as we can tell, farm animals were introduced into the house and allowed to lay claim to various portions of the home by urinating and defecating on that carpet. But there are few problems that can't be solved by careful and responsible applications of overkill, so one giant sander later, this is the result. There's actually some patchwork against the far wall, but it blended well and is hard to see in the photo. All these rooms originally had plaster-on-lath walls, which we tore out because A) they were sagging and breaking down in places, and you need to be an artist to repair them, and B) we needed to rewire totally in every room, so we figured we might as well go back to bare studs. Plaster-on-lath involves laying thin wooden lath across the studs, then slathering on layers of plaster "mud" over the framework until a smooth, uniform surface results. This means the walls are thick--tear it out, and your flooring might end two inches out from the studs, so if you just throw 1/2-inch drywall and trim up there, you have a gap. It also means nobody cared much about how square the fronts of the studs were, because they were going to slather an inch or more of plaster on top of them and smooth the plaster. That means that if you just hang drywall on the studs the way you would in a modern house, it will resemble a skate park seen from above. Some spots will be flat, others will gently undulate like the soft green hills of Dear Old Eire, and some may resemble nothing so much as a series of cliffs and ramps.
The upside is that I expect the next few rooms to be a lot easier to finish now that I've done this one. 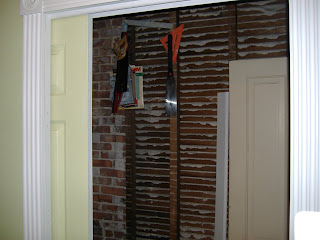 Here you can see the pocket door peeking out of its pocket. The room really is as small as it looks above, and you can see that the hallway is not huge--it might be 40 inches wide. The pocket doors make this possible. That door is going to be painted blue this morning to contrast better with the green wall--too much of that green is overwhelming.
You can also see the back of some of that plaster-and-lath I talked about above. It's supposed to look that sloppy from behind; the first layer of mud is slathered on and allowed to ooze through the slats to "key" it--that locked it to the wall and made the whole thing pretty solid. The bricks are the chimney that runs through the center of the house. We had high hopes that there could be a fireplace on the ground floor, but it turns out the chimney was built purely for coal. I've been told that when this house was built, it was considered a sign of class to heat one's house exclusively with coal and not wood fires. Anyway, there's no fireplace at the bottom and the unlined chimney is disintegrating on us. This spring we'll install high-efficiency furnace and water heater and then start removing the chimney. That will give us more space in two rooms and a hallway, plus allow us to seal the last opening in our roof. With the bathrooms venting into the attic space with newfangled valves, the roof should last a long time. 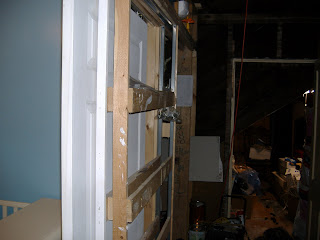 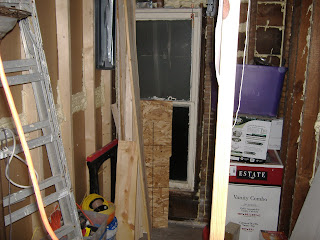 And stepping out and to our left, we can see what's NOT done. :) This bathroom is next, followed by the back bedroom you can see through the doorway in the picture on the left. When those two projects are done, every member of the family will have his own bedroom within a few steps of a full bath. Life will be significantly less crazy . . . I think.
Posted by Don at 5:04 PM

Email ThisBlogThis!Share to TwitterShare to FacebookShare to Pinterest
Labels: The Money Pit

OK my lack of a Y chromosome makes most of your post complete blather to me. However I have one question- where did you get the crib? I've never seen one with storage and I want one!

Sorry, that's a yard Sale Special. I have no idea who made it or when, but we're the third ones to paint it.

the cool thing is that the crib rails come off to make a toddler bed, and the chest of drawers is just set into the rails, so when the time comes you can just take it off, put a single bedspring and mattress on it and have bed with drawers underneath for an older child.

It all looks real good to me. No one is as critical as one's self, when it comes to stuff like that. If you have a good explanation, then those who know how to do it will accept it, and those who do not will simply be in awe of your skills.

Man... To tell you the truth, you were the insipration for me renovating my house when I saw it on your original (no deleted) blog...

And I didn't even have to finish anything before you were inspired. That's powerful inspiring right there. I must be better at this than I thought!

PS--The posts from the old blog are still here. Blogspot found them for me and I merged them with the new stuff.

Nice- and I have a question, since our house is plaster and lathe as well... any good resources to teach me this as a DIY or is it just smash & learn? I want to start slowly room by room, but want to do it decent without killing what little free time I get...

I'm probably not the guy to ask. I haven't tried to repair any of the plaster/lath stuff. We just rip it out and hang drywall. That wouldn't be best for everyone, but we're doing new windows, new wiring, insulation, plumbing . . . it just makes a lot of things easier if we go down to bare studs.

Nothing can prepare you for the amount of dust and grit that will float in your air as you rip this stuff out, especially if you have lots of soot and coal dust hiding in some of your walls as we did. You'll look like coal miners.

The easiest way we found was to use large hammers between the studs to break the lath behind the plaster, then use prybars or claw hammers to hook behind the lath and pull it out. Done right, the lath comes off the studs more or less intact and the plaster comes off in large chunks. The bigger the chunks the better, both for removal from the house and to keep the dust down. We tried everything from heavy tarps on the floor gathered up every so often with a load of plaster (HEAVY!) to "contractor" garbage bags from the hardware store (also heavy, but manageable and surprisingly strong) to a wheelbarrow to get the stuff out.

We also succumbed to the temptation to strip out extra rooms while we had a dumpster on site, so most of the living room has been bare studs for awhile now. That's OK for me (I could live in a lean-to next to a dirty pond if I had wi-fi and a bookshelf) but not so great for a family. By gum, we sent that dumpster back FULL, though!

- Keep the plaster and lathe somewhere for the history. Exposed, even, on the back side with a plexiglass "wall." It's teh coolness.

- Those bricks are valuable. Be careful taking them out, and sell them. Do the research.

Good work. I dream of even having a home to repair.

Maybe that'd be cool in Soho, but here I just want safe, clean walls. Not every part of the house will be quite as colorful-modern as that one room, though. We're saving the giant converging pocket doors between the front and middle great rooms, for instance, and the antique iron inserts that were used to make furnace grates look like fireplaces (complete with mantels and stone faces.) There's also an oak staircase with a lot of hand-carved parts, and we're keeping the transoms over the doors in a few places, too.

You've been starving us, bud.

And get a gun post in, while yer at it.

And bake me a pie!