John Kass has a new column up. It's an epic tale, a drama of family love, loyalty, and devotion. I call it The Brothers Boyle. 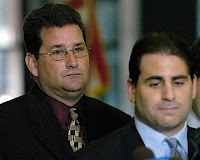 You see, the Boyle brothers are good old boys from Chicago. They're good boys, loyal boys, but sometimes they get a little high-spirited. "Quarters" (over there on the left) likes to take other peoples' money; he's most famous for stealing millions of dollars in quarters from Chicago's infamous toll road system (Official motto: "Abandon hope and speedometers, all ye who hazard this path of the damned.") But he got out after that one, so he's not in prison for it anymore. He's in prison for a totally unrelated matter; he took a LOT of bribes in the Hired Truck program in Chicago. That would be the Hired Truck Scandal that did not result in an impeachment because it happened under Daley instead of Blagojevich. You might be adding all this up and wondering how Quarters could have been in a position to demand bribes after he was convicted and served time for stealing public funds; on the other hand, you might be familiar enough with Chicago or New York or New Orleans to realize that The Chicago Way does not allow for silly grudges when a good ol' boy who has always been good at getting out the vote gets himself into trouble with a spot of high-spirited hijinks like embezzling a few million. Quarters served his time, he kept his mouth shut, and clearly he deserved to be taken care of. It's regrettable that he got caught again, but whaddya gonna do, right? 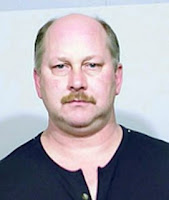 The real tragedy of The Quarters Saga is the effect it had on Quarters' devoted brother, "Matches" Boyle, a Chicago firefighter. If "Matches" seems like an odd nickname for a Lieutenant in a major metropolitan fire department, it could be because Matches like starting fires at least as much as he liked to put them out. Now that the rest of his story can be told, however, it turns out that among the many ways that this cold, hard world drove poor Matches to commit multiple acts of arson, the cruelest was this: people in the media kept talking about his brother, Quarters, as if the man was some sort of news story just because he kept committing felonies and then getting plum city jobs. It's enough to make you wonder how any of us manages to get through the day without torching few buildings, isn't it?

Now, in one way, Matches' story has a happy ending. There were those who thought that he'd have to serve a lot of time for committing arson while collecting a paycheck as a firefighter, especially since a few people seem to be holding a real grudge about that elementary school he tried to burn down. But he's apparently out of prison already after serving less than two years. Unfortunately, his battle is not over. Even though the man had a good reason (well, a lot of good reasons) for what he did, and even though the real culprit that really caused those fires (society) never spent a day in prison, there are apparently still people out there holding a grudge. These small-minded, negative people are going so far as to demand that Matches be denied his pension as a Chicago firefighter. It's a measly 50k or so per year, apparently, but it appears that they've found some tiny little lawyer's loophole that says that if you have to leave the force because you're convicted of committing felonies . . . . on city time . . . . in your capacity as a firefighter . . . they can keep your pension!

Sometimes there's no justice in this world, but I'm not too worried about it. I bet there's somebody in Chicago who can find a city job for Matches if it comes to that.

Email ThisBlogThis!Share to TwitterShare to FacebookShare to Pinterest
Labels: The Chicago Way