So I've added a new member to the blogroll, "Weapons, Warfare, and Industrial Idiocy." This guy apparently hates libertarians (libertarians such as myself.) I could forgive that pretty easily, but then he had to go and be mean to Spyderco. SPYDERCO. The people with all the patents! Makers of the Clipit! The Sharpmaker! The Military, the Police, the Rescue, the Native . . . . they make a bazillion knives, and most of them are awesome. I just don't get it.

So why does he get added to the blogroll? Because I find myself reading his blog regularly. And because I forgot the name of the blog the other day and wasn't able to get back to it for awhile, until I remembered the right words to make Google happy. And, honestly, there are two things I like about this guy:

2. He's capable of being brash, arrogant and overbearing AND of admitting when he's wrong. Sometimes. If that sounds like a left-handed compliment, take a look around the internet and see how many people are truly incapable of saying "I think I was mistaken that time. You were right."
I do it, but only because it's so unexpected that it disarms people and then I smack them again.

If you're one of the four people who read this page on a regular basis, you might have noticed that my blogroll has changed.

Well, let's not kid ourselves. You would never have noticed that, but I just told you, so we can move forward from there, yes? Yes.
It's interesting. I haven't been back to David Codrea's page much since being lectured on my cowardice. Apparently, it's cowardly to assume that your political opponents love their own children and have good intentions. My political opponents, according to this school of thought, are villains in jackboots, twirling their oily black handlebar mustaches with glee at the thought of destroying freedom and replacing good old-fashioned American love and kindness with hatred and filth. The only catch, of course, is that this is all delusional nonsense. In the real world, your political enemies think they're saving you from yourself. While you're trying to explain why their grandiose plans won't work, they're too busy imagining how you will grovel and apologize when you realize how close you came to ruining everything by not listening to them in the first place. In short, David Codrea and I still agree on a lot of things, but I don't read him much anymore, so I'm making room in the blogroll.
Posted by Don at 7:12 PM 4 comments:

WTF Moment at War On Guns 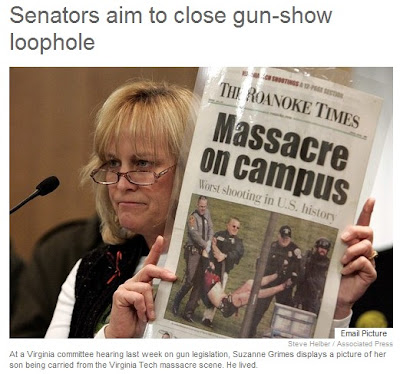 Are you brave enough to declare that this woman wants gun control because she's plotting to get her own son murdered?
I'm too cowardly for that one.


Posted by David Codrea at his "War On Guns" blog:

"Facts the antis don't want to confuse anybody with:
Virginia Tech was a "gun free zone."
Cho did not get any of his weapons at a gun show. . . . "

OK, I'm on board so far. All true facts, all facts that aren't very convenient if you're trying to convince people to go defenseless in the name of safety.

The second response, posted by one "Straightarrow":

"I must think that woman doesn't love her son. Else why would she demand he remain helpless when she can see the results of such a state. Life insurance, maybe?"

Uh . . . OK. So she doesn't actually believe in gun control, she agrees with us that gun control will make her son less safe--but that's OK with her because she doesn't love her own son, and would even like to see him murdered by some nut because then she could get some cash from a life insurance policy. Hmm.

Don't get stupid and start saying she hates her son. Do you have any idea how insane that makes you (and me, by implication) sound to all the fence-sitters out there?

Think about the last time some anti-gunner talked about how gun nuts don't love their children because they let them live in homes with guns in them. Did you buy that crap? I doubt it."

That triggered a silly furball, and I won't post it all here. You can click the link if you want to see it all, but I will say this: Straightarrow says he didn't misspeak. He says he meant every word, and still believes it's all true. And true to his beliefs, he says I don't actually disagree with him, either; instead, I'm a coward because I won't dare to call the mother in the story "evil."

Take a look and tell me what you think. Personally, I don't see the percentage in pretending that I'm so right that everyone in the world, even my most staunch opponents, secretly agree with me, but are murderous, hateful, evil bastards who glory in doing evil. I just find that delusional.

I firmly believe that there are people out there (lots of people) who honestly disagree with me and who think they're doing the best they can for their families. I think they're wrong, they think I'm wrong, and that's just the way it is. Am I nuts? Or am I just a coward?
I feel like I've stepped through the looking glass into a place where decency is cowardice, Occam's Razor is forgotten, and straw men and begging the question are no longer considered fallacy.
Posted by Don at 8:55 PM 10 comments:

Curse You, Mrs. B. (Thoughts for a Snow Day)

So, I got The Call this morning.
"No school today! Go back to bed!"

This causes me to think several thoughts. I do not promise consistency of thought at 4:45 in the morning, so don't bother pointing out that this doesn't make sense unless you're witty enough to entertain the rest of us while you do it. Let's examine a few thoughts, shall we?


So, what are the downsides? Well, I really do like my job. And for me, this day off really amounts to a day to do carpentry, wiring, and drywall. Besides that, today was to be our "Out of the Blue Day." They didn't do this stuff when I was a kid, but it's pretty neat. Maybe I'll just make that its own post, but suffice it to say, the kids would have enjoyed it. That's not really a big deal, though, since we'll move it. Still, it does warm my heart a little to think that the little darlings couldn't really win today no matter what happened.

What? Who's Mrs. B?
Well.
Mrs. B. is the reason I don't have any students at school today. You see, Mrs. B. decided that she needed a snow day, and a snow day on a Friday would be ideal. Therefore, she resolved to cause one. How does one person cause a school cancellation due to snow?
There are various accepted methods, but Mrs. B hangs a very large paper snowman, complete with large snowflakes, blue background and the words "LET IT SNOW!" She hung the thing up outside our classroom door yesterday morning just to make sure.
What's that? You don't believe in such things? I'll buy that from the Atheists. The rest of you just need to transfer a little faith across. Mrs. B. states that The Snowman has about an 80% record of causing school cancellations, having failed once last year.

So, if you're one of those parents who's looking for a babysitter in central Illinois today, you know who to blame.
Posted by Don at 5:44 AM 3 comments: