Paging Joe Allen: A Winner Is You! 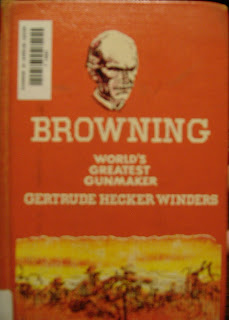 (UPDATE: Joe contacted me last night and his prize is on its way. Maybe when he gets it, he'll tell you what it is.) 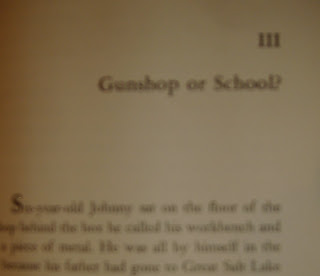 Boy, when I'm wrong, I'm wrong. You people blew my doors off! On the upside, Matt G. notes in the Comments to my little contest that I am the one and only Google result for "Gunshop or School." I don't care what Tyler Durden says; I really am a unique and special little snowflake.

In retrospect, I should have made you guess the title, which, incidentally, was BROWNING: World's Greatest Gunmaker by Gertrude Hecker Winders. I've been reading it at home, and it's pretty good stuff for an elementary/junior high/middle school library. It's copyrighted 1961 and stamped "Ball Junior High School," which means it has moved from building to building with the library at least three times. It has the feeling of old family stories, and indeed we find that Mrs. Winders profusely thanked members of the Browning family for their time. Oddly enough, rather than use photographs or professional illustration, all the illustrations are Mrs. Winders' own sketches. They resemble a child's simple line drawings of guns, the same sort of thing you'd have seen in my notebooks when I was in the 6th grade, and illustrations of people are not attempted, though a flower and a pair of moccasins snuck in there along the way.

What can I say? I was surprised. So, where were we?
Oh, yes: Joe Allen. If you want a prize, you have to send me your address! Blogger says it's none of my business. I'm not saying you have to send it--were I in your shoes, I wouldn't want some gun nut in a funny hat to know where I live, either--but in that case, I'm keeping your swag for myself.