Blagojevich I: I'm Sorry, I Can't Pretend to Be Shocked 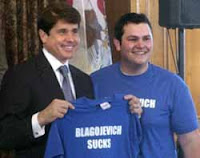 So..... does Blagojevich know where Daly's bodies are buried? Will he sing or threaten to? If so, will he repeatedly fall down a flight of stairs in custody, so nobody further up gets fingered?

My first thought was that the 'Feds' figured that waiting until Obamamama was elected to spring their trap would result in orders from "higher up" to persue no such action. It does contrast with the way Ryan's arrest was handled.

May I disagree with you about the people electing what we deserve? In part, I do agree with you; too many did vote for him. (Especially those marvelous residents of the various cemetaries, parking lots, and lakes of Chicago...) Think back to the choice we had; one known quantity of gross incompetence and a flaming anti-gun liberal with skeletons spilling from her closet. Personally, I did not vote for either of them- I think I went Libertarian. My take on Illinois state politics is that the Chicago political machine will elect who it wants, and that's what happened here. The Republicans had no one of standing that they could run.

And I don't claim to have any idea what Blagojevich can really offer with regard to Daley. Anything he was personally involved in, obviously, but beyond that? It all depends on whether Daley kept Blago at arms' length. It's hard to imagine that he doesn't know a lot of things that could get Daley into hot water, but Daley's slippery. I doubt there are taped phone calls from Daley openly demanding bribes, for instance.

Blagojevich, Patti Blagojevich (his wife) and Dick Mell (her father) and Daley are all going to have to figure out where their loyalties lie--along with a lot of others.

I suspect Fitz was acting to prevent further embarrassment to the government. Can't let the sheeple lose too much faith and credit.

Regarding Daley, I bet Blago has nothing on him.

I had a little celebration with cake and a bottle of champagne. I believe Illinois deserved Blagojevich. Its the small percentage of people who voted for Topinka who do not deserve Illinois. People have been saying its a sad day for Illinois. Its not. This has been going on all along, most of us already knew. Its a happy day that this corruption has been exposed!

Lets briefly discuss the 5 senate candidates. None of them are virgins to political office. How can I believe the Gov. or a minion did not approach all five on the pay to play contest, and yet all 5 choir boys/ girls claim ignorance on the matter and no law enforcement authorities were informed on this matter of coercion, bribery, and abuse of office. I ask what was Lisa Madigan (candidate #2) doing for 6 years as States Atty while all this was going on?

How many years have the other candidates been involved in Illinois politics? J.J Jr. Candidate #5 claims ignorance as well yea Riiiiight.

Why does it take a Federal investigation to find corruption in Illinois?

I suggest each election refuse to vote incumbent, lets spread the wealth around and give everyone a chance at some graft.

fyi - on who knew what/when about the investigation, WGN/CLTV were talking to Tribune people. Seems the Trib had info on some of the wiretaps and other aspects of investigation and were asked to NOT publish stories right away. (got this from watching like it was a train wreck, couldn't turn it off :) )

he choked our economy to death and humped the cold, lifeless corpse while he laughed at us

I suppose I have a twisted sense of humor, because I found that uproariously funny.

I'm glad he's going to the clink, and sorry that Illinois has to put up with him and his ilk. Too bad the rest of the state can't vote Chicago into the lake.

I talked to the owner of a gun shop in Plainfield a long time ago, I recall him mentioning that Blago (or maybe Daley) had a very valuable collection of classic Winchester shotguns.

So why can't I shake the nagging feeling that he might do it anyway just to see what shakes out? Maybe I've lived here too long.

I dunno, assuming there's anyone in Illinois who isn't on the take, and the Blag knew about it, he could really hurt their career by nominating them for the seat...

All I can say is I didn't vote for him EVER. But then I have been following Chicago Politics for a long time and I knew he was slime from day one. As far as his Richardness, Blago probably has nothing on him because they literally cannot stand each other, so they never talk, never. The one to watch next is little Alexi Ginoulias. 29 year old guy who was never registered to vote gets elected Treasuer? Could it be because of his families banking ties, hmmm. And how does the gov pull off some of this stuff without the treasurers help. Verry innteresting.