I Don't Think Your Car's Supposed to Sound Like That 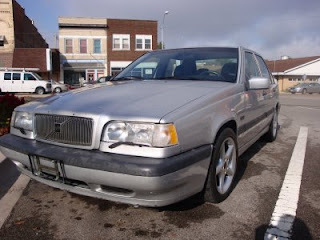 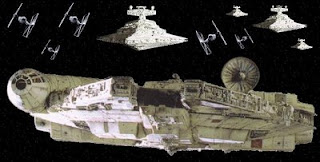 The Turbo is like the Falcon in many ways:
On that last note, the timing belt is coming due soon, and I'm going to have to get it done. Gotta clean out the garage first; I got away with the driveway repairs today, but I think that was the last time until spring.

Today? Oh, yeah, today. Today I replaced the rear brake pads, rotors, and emergency brake shoes. Why? Because of this: 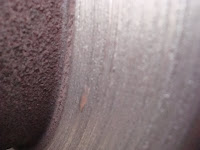 It looks a little like beautiful planetary rings in this picture, but it's just your average brake rotor. You can see the rusty hub on the left, and on the right, the rings where the brake pad made contact. If you're familiar with the way brakes work, you know that the pads are squeezed against the rotor by the calipers when you depress the brake pedal. The pads squeeze the rotor and slow down its rotation, and since it's locked on the wheel hub, that slows the wheel and stops the car. But normally these rings are sort of polished and glossy. This set seems to be rough and grooved, as if something had torn and gouged at the rotor. Do you think maybe that's why my car has sounded like it was coming apart at the seams for the last two weeks? Signs point to yes! 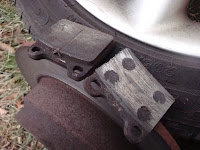 Here you can see the pads from the left rear rotor. The inside pad, on the left, still has a couple of millimeters of material left. The outside pad, on the right, is bare metal. Ouch. 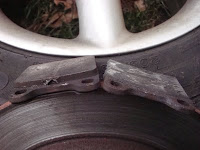 The photo at the right shows the relative thickness a little better. I probably should have put one next to a new pad to show the difference, but what the heck. Back when this pad was just squealing a little, I thought I had a thin pad and an indicator spring was squealing. I was surprised to learn that Volvos don't usually have the indicators (thin pieces of metal bent so that their tips contact the rotor at a right angle. When the pads are at a useful thickness, they don't touch the rotor. When the pads wear down enough for them to touch the rotor, they emit a shriek you can hear for a block, which gets steadily worse as the pad gets thinner. Elegant little bits of engineering--which makes it weirder that Volvo doesn't use them.) Anyway, I was told that Volvos will almost always squeal with any aftermarket pads, even high-performance, high-dollar pieces. Since the Jurid pads Volvo uses are pretty cheap, I went ahead and got those. I did buy my rotors at NAPA, for two reasons. First, my local NAPA has never let me down. Second, when I ordered the various pads, shoes and spring parts, I was hoping to park the car and avoid damaging the rotor any further so it could be turned. That didn't work out, and I needed the rotors on short notice.

It also turns out that the Volvo 850 parking brake is a drum brake inside each of the rear brake rotors. I've never heard of an emergency brake designed that way, but I guess it works. The Haynes manual gave the procedure for checking the parking brake shoes, but noted "the shoes should rarely wear unless the e-brake has been used habitually to stop the car." Members at www.turbobricks.com knew better; "Get the e-brake parts, you'll need them" they said. I'm glad I did! Here's what the shoes looked like when I removed the disc hub, next to the new shoes for comparison: 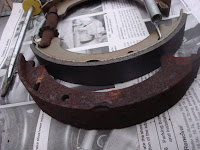 I don't really use the e-brake very often, but this did not inspire confidence. I'm not sure whether it was even a wear issue, or whether the shoe rusted so badly that the material sloughed off somehow. If I had to guess, I'd say someone drove with the e-brake engaged by accident. Maybe more than a little.

So I had a merry time today; I set up in the driveway, since it would have taken longer to clean out the "open" side of the garage than to do the brake work anyway, and jacked 'er on up. There were, predictably, a few oddities. For one thing, the flare nuts on Volvo brake lines are apparently somewhere between 12mm and 10mm, and also somewhere between 7/16 and 3/8, because I bought wrenches in both metric and SAE and none of them worked. 7/16 and 11mm, which appear to be virtually the same, fit over the nut but are just a little too loose to turn it. Luckily, the manual was right, and as long as you support the brake caliper with some wire, you don't actually need to remove the brake line. That made me nervous, though, because I could picture myself kinking the steel brake line and screwing myself royally.

Also odd was the note in the manual that, once the caliper mounting bolts are removed, "new bolts will be required for re-assembly." I pulled the bolts, examined them closely, and found them to be perfectly ordinary automotive flange bolts with either 13mm or 1/2" heads. They're pretty beefy, and they didn't seem to be worn or damaged at all. They had a little red Loc-Tite on the threads, but I just saw no reason to try to find replacements . . . and besides, even FCP Groton doesn't list them, much less places like NAPA, so I'm guessing I have to go to a Volvo dealer and beg if I want them. I'll ask on the forums, but I just don't see what could make that necessary. I put 'em back in "farmer tight" and I'll check on 'em in a little while to see how they're doing; they're easy to reach.

By the end of the day, it was getting dark and beginning to mist rain, and I was not feeling too sparkly as I wrestled with the calipers. The manual says to compress the pistons with a pair of pliers but not pry against the rotor. Well, I tried the pliers, and a big set of blue-handled plumber's pliers got me most of the way home, but at some point the outside piston was bottomed out and simply didn't want to go any further. I fought it and fought it and, in the end, removed the shim from the pad on that side to get it to fit between the piston and the rotor. I used brake-quiet grease on the backs of the pads, and I have to admit, they are silent and the stopping power is great. But I worry about that outside piston in that left caliper. I don't think it's coincidence that the pad on that side wore down to nothing so fast, and then I couldn't get the stupid thing to compress far enough to fit the new pad in. I think in the near future I'm going to end up needing to get a caliper kit and redo the caliper, cleaning and fixing that piston in the process. That's something I've never done before, but how hard can it be, really?

No need to answer that.

How fast can she make the Kessel Run?

"Something is probably breaking at any given moment, but that's OK."

Kind of reminds me of my one solitary Volvo, back when. Kind of fun to drive, but a money sink.

Good job. You did about $600 worth of brake work, in my estimation. Nice catch on the E brake-- it looks terrible.

"That's something I've never done before, but how hard can it be, really?"

That is a common phrase for me around my house. It is usually followed up by, "i'll just look it up on google"

Sometimes the fiance convinces me to just call a professional.....sometimes.

It has been my experience that rebuilding a caliper is a fools pursuit. NAPA can provide a very nice rebuilt unit and save you much time and effort and maybe even money.

NAPA well it may be necessary considering you have a Volvo but I would try Discount/Advance first. They don't have the best quality and 1 of every 5 or so will be defective but they will honor their warranty if you just hold on to your receipt. When you are doing your own labor the savings can be worth the risk of having to do the work twice.

The Rotors from the photo don't look too horrible I have rode out on worse. If you want to do it on the cheep just get some of the "lifetime" pads and ride them for awhile. They are not lifetime but they are as hard as hell which has a side effect of burning the rotors down (the effect you happen to be looking for with some slight ridges from not changing your brakes as needed in the past).

Also VERY IMPORTANT I noticed you didn't mention you bleed the brakes at the end??? This is simple (takes two people) but if not done you will lose some of your pedal when driving (caused by air in the system). That is not good and dangerous.

-jack car up on the caliper you should see a small bleed nipple (should have a little rubber boot on it) a small wrench 10mm or round about.
-overfill your brake fluid reservoir with brake fluid.
-find the end of the line in the brake line they start at your booster (near fluid reservoir) and run to one front 2nd front then back 1 back 2.
-have wife pump up brake (CAR OFF) until she gets as much pedal possible then hold pressure and say ready.
-You turn that nipple slowly just enough for fluid to come out (fluid will come out you should have pan under brake).
-Wife should push all the way down to floor and hold DO NOT LET UP UNTIL TOLD. Wife should scream floor when she hits the floor board and Don't let up.
-You will see air, spit, solid stream come out. When she hits the floor tighten back nipple closing line.
-Repeat until you have solid stream from start to finish.
-NOTE wife cannot let off brake until you close nipple or brakes will suck more air (start all over from worse).
-Repeat this procedure on every caliper until you are back to the first one off the booster.
-refill reservoir if needed to the proper level.

"That's something I've never done before, but how hard can it be, really?"

This is usually followed by lots of frustration and cursing.

Those rear shoes looked terrible! Makes me glad I've got disc brakes in the rear.