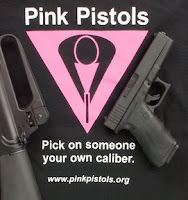 Two really stupid things happened recently, so some of the stuff I wanted to blog got pushed out of the way. The first stupid thing happened last month when Pride Northwest, the organizers of the Gay Pride events in Portland, OR decided to eject a gay rights activist named Lonnie Wilson from the Gay Pride Parade, following close on the heels of a similarly baffling ejection in Utah. Why would they eject a an activist for gay rights from the Pride events? Hell, why would they eject any gay man from the Pride events at all?

Because Lonnie Wilson has the unmitigated gall to suggest that if gay people don’t want to be bashed and murdered, it would be smart for them to get some training and arm themselves. Now, in Illinois, this idea wouldn’t be very practical, since gays, like the rest of us, are legally debarred the use of arms in public. But in 48 states, it can be done. Wilson, though, went one step further than carrying a gun—he carried his gun openly and this the blissninnies running the Pride events could not abide. Of course, open carry is perfectly legal in Oregon, as it is in most states (but again, I must point out, utterly illegal in Illinois) and Mr. Wilson was well within his rights. And of course, the Pride organizers will never know whether a pack of wannabe gay-bashing tough guys turned right ‘round and went back to hanging out in front of the Dairy Queen and mean-mugging emo kids because they noticed that some of them queers has guns.

Apparently, Pride Northwest as represented by Stefanie Wells (the official who ordered Mr. Wilson thrown out of the event) has trouble with irony:

"Wow you have no clue to the Trauma that you have caused some people at pride by asserting your 'rights'. Did you once stop to think that at least 50% of the queer population has had death threats made upon them, (sic)" wrote Wells. "or that you might traumatize a former student of Thuston High School, I know I didn't!" Wells is referring to the school shooting event at Thurston High School on May 20, 1998, when Kipland "Kip" Kinkel, who was later diagnosed with paranoid schizophrenia, killed two of his classmates and wounded 25, after murdering both of his parents.

By the way, is there ANY scientific evidence at all that says that survivors of shooting incidents are traumatized by the sight of firearms? If that’s true, how is it that so many new gun owners are people who’ve been mugged or assaulted, sometimes by someone with a firearm? I’m thinking Ms. Wells was the one traumatized by the sight of Mr. Wilson’s gun. Therapy would probably help.

Wow. That press release just broke the needle on my Irony-o-meter.

It is not easy being satirical in this world of post-satire, but we soldier on.

Actually, in a way, this is refreshing consistency. Most anti-gunners are really afraid of some "Other" with a gun. These people are afraid of "One of Our Own" with a gun. On second thought, I salute them.

heh... there was a time long ago that I got to deal with similar problems: being an armed pagan. Y'all might even remember it, as it generated a post on the Firing Line looking for other, like-minded folks...

One thing I have noticed, the groups that tend to liberal beliefs also tend to be incredibly fearful/hateful of others...

Nice job Don. This is my "backyard", these are the same type of people that think only their "elitist" opinion matters and get pissed off when you oppose it while telling you that you should be more open minded. I told a guy (supporting Wells) at work that he's a bigot, that's the right thing to do when someone offers a differing opinion, right? This so called "open-minded" person is the most closed minded person I know when we discuss firearms and our RKBA.

Since it IS a gay pride event, shouldn't you refer to her/it as Mr. Wells?