Charlton Heston Is Gone--Feds Still Can't Have His Rifle 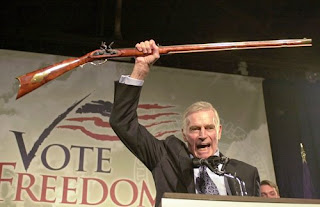 I was planning to relate a story about Charlton Heston here. It was a story about a really vicious wannabe feminist who once told me that she knew all about Heston and what a hateful, violent racist he was because she'd once had dinner with the man.

I'm not going to tell that story in any depth, because the point was to explain how I knew she just wasn't telling the truth. That's unnecessary, because Charlton Heston has already explained it in his own words, and he did a better job than what I had in mind. So here, to refute both her outright calumny and the more subtle knives of the Chicago Tribune ("Controversial" is not your best code word, folks. Only cowards can avoid controversy) are the words of Charlton Heston, from his famous speech "Winning the Culture War" delivered at Harvard in 1999. (Click the link to read or listen to the entire speech.)

Let me back up a little. About a year or two ago, I became president of the National Rifle Association, which protects the right to keep and bear arms of American citizens. I ran for office. I was elected, and now I serve. I serve as a moving target for the media who've called me everything from "ridiculous" and "duped" to a "brain-injured, senile, crazy old man." I know, I'm pretty old, but I sure Lord ain't senile. As I've stood in the crosshairs of those who target Second Amendment freedoms, I've realized that firearms are -- are not the only issue. No, it's much, much bigger than that. I've come to understand that a cultural war is raging across our land, in which, with Orwellian fervor, certain accepted thoughts and speech are mandated.

For example, I marched for civil rights with Dr. King in 1963 -- and long before Hollywood found it acceptable, I may say. But when I told an audience last year that white pride is just as valid as black pride or red pride or anyone else's pride, they called me a racist.

I've worked with brilliantly talented homosexuals all my life -- throughout my whole career. But when I told an audience that gay rights should extend no further than your rights or my rights, I was called a homophobe.

I served in World War II against the Axis powers. But during a speech, when I drew an analogy between singling out the innocent Jews and singling out innocent gun owners, I was called an anti-Semite.

Everyone I know knows I would never raise a closed fist against my country. But when I asked an audience to oppose this cultural persecution I'm talking about, I was compared to Timothy McVeigh.

From Time magazine to friends and colleagues, they're essentially saying, "Chuck, how dare you speak your mind like that. You are using language not authorized for public consumption." But I am not afraid. If Americans believed in political correctness, we'd still be King George's boys -- subjects bound to the British crown.

That was Charlton Heston.

He was a great actor, too, and I'm one of those people who doesn't care much what an actor has to say about anything--but Heston's words have power of their own. There's no need for a celebrity to speak those words; they're not compelling because Charlton Heston is famous. They're true and they're simple and they're clear.

That was Charlton Heston. I'm glad his battle with Alzheimer's is over, but I do wish we hadn't lost him. Rest in peace, Mr. Heston.

(UPDATE: Better click the Tribune link quickly; they've already changed their headline from something along the lines of "Actor Was the Face of the NRA" to "In Mid-Life, Liberal Actor Migrated to Conservatism, Became the Face of the NRA." Next it'll be "Heston Battled Alzheimer's, Was Exploited by Gun Lobby."
Posted by Don at 11:50 AM

Which feds you talking about, Don? The feds that shot their best friend in the face with a shotgun, and never even got questioned by 5-0? Or, is it the feds that killed the (admittedly superfluous) assault rifle ban?

Heston was a crank, and gave the gun lobby not only a bad name in the public arena, but a black eye. If the intent is to win over 'middle America,' bombast mixed in with your hate speech will not help.

Comparing the "assault on your rights" of having to get a license to own a gun to the systematic murder of an entire race of humanity is not only facile, it lacks anything approaching logical rigor, and it is in fact, hate speech.

My knives aren't subtle. Heston played into the hysteria of the gun lobby, and that drew a LOT of negative attention from the people that the gun lobby desperately needs: the middle. I assume he did it intentionally, as he persisted in the wild rhetoric to the end, and that harmed gun owners' causes more than helped. The Brady Bill Set and other super-left-wingers *profit* from people like Heston; they can turn to the middle and say, 'look at those gun nuts, aren't they crazy?' and the middle looks at an over-privileged white guy making extreme statements (...my cold, dead fingers) and agrees.

Was Heston hateful or racist? Meh, not really more than anyone else from that generation, and arguably significantly less so than most (yes, I see the dichotomy between this statement and the paragraph above, that's part of my point). Was he violent? The record clearly states, no. Did he throw gas on the flames of leftist sentiments for increasingly restrictive gun regulation, and sound like an idiot while doing so? Unreservedly, yes.

As gun owners, we should be striving to take the venom away from the debate. Wild propaganda and firey invective will not work in our favour. I am very sorry that Mr Heston suffered such a debilitating disease, and I have deep sympathy for his friends and family in their time of loss. I do though, hope that more level-headed and thoughtful people will lead the NRA from here on out (but I don't have *much* hope of that).

And since you stuck your neck out on a personal assessment, I will too: if you can watch Soylent Green and listen to him blubbing that "Soylent Green is peeeeeeeepil" and still think he's a great actor, I guess my opinions on acting are just as looney as my opinions on guns.

Some Call Me MoE