Yesterday, I rambled and meandered a bit. People made the mistake of tolerating this, which, as any school teacher can tell you, is the same as asking for more. I'm truly sorry, but it's the only way people ever learn.

Anyway, I've thought about it, and I've decided that the segment of my writing that was best-received by the public was the part where I shamelessly name-dropped some of my friends (and a few strangers like Ambulance Driver) and used their hard-won popularity to make myself look good. Today I will use the popularity of George Hill, the Mad Ogre to boost my own.

If you're not familiar with George, I can't imagine what possessed you to read my stuff, but you'd better click on that link and take a look. I'll wait, but seriously, come back, because it's not like this all the way through.

OK, you back? You get the whole "Mad Ogre" thing? Vitriol, Vitamins, Vegemite . . . . well, something like that. Well, here's the thing. I'd love to call myself an ogre. I wouldn't have to be mad, either. I could easily pull off a Grumpy Ogre, a Cuddly Ogre or even an Over-Educated Ogre. But this Hill guy, he's like the Hillary Clinton of ogres. He's sucked all the oxygen out of the room. You can't pull off the ogre thing anymore; everywhere you go, people just say "Oh, yeah, so you're basically like that Mad Ogre guy, right?"

Even that wouldn't be so bad, except that then you have to run through the litany of ways in which you are less cool than George Hill. You're just standing there telling this stranger all about how you don't have five boys and you're not married to a dancer who likes to shoot guns in the desert and you don't have a huge green 4x4 and you've never actually owned a pet wolf, nor have you ever once in your sad little life been employed as a cop, a soldier, or a gunslinger, and by now you just want to pay for your colby cheese and your paper plates and go.

I mean, the guy was a gunslinger, people. I can't compete with that. Did you know he got shot right in the chest with a .45 once? He totally did. I mean, I have a beard and everything--I'm manly, don't get me wrong--but I'm not in that league. Neither are you, so don't get smug.

There is one, and only one, important respect in which my ogreness* is competitive with that of George Hill, and that is the all-important candid photo category. Observe: 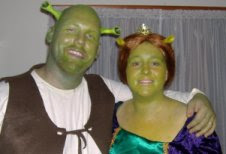 Now these are Ogres. And, seriously you guys, George's wife is a hot dancer and that's great and all, but is she an ogre?**
I submit to you that even George would admit that she is not.
Tune in Monday when I'll explain that I can deadlift more than Tamara from View from the Porch. I think.

*Apparently the narrow-minded bean pluckers who created Firefox's spell check function don't think "ogreness" is a word. No wonder the Japanese are eating our lunch.

**Actual photo, no Photoshop or retouching.
Posted by Don at 10:02 PM

I've met that Ogre once a couple years back- A fine guy and one I wish was a couple hours closer so we could hang out and swap stories more often.

That is one hot photograph. The cleanest cut ogres I've seen in a long time. :)

Hey Don! Don't know if you remember me from THR, but it's nice to see ya here! Hope ya don't mind, but I've added you to my blogroll...

I actually left out a couple of things about George since the list was already getting clunky. He's a fascinating individual. I'm just saying, the green guns, the green truck . . . compensating. He ain't green!

See, if The Mad Ogre was *really* manly, he'd've caught the bullet in his teeth.

And I've got a beard too. So there. And stuff.