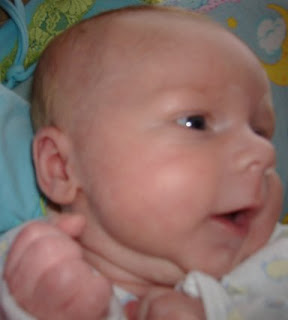 World, meet Sean Michael Gwinn, age almost three months. Sean was born on Pi day, which was pretty early, but after a short return to the hospital and several sleepless nights for mom and dad, he started gaining weight and growing like a weed. He's my very favorite baby. He's not your baby, so you're probably less fascinated by the various noises and faces he's now able to make; therefore I'll just let the picture speak for itself. 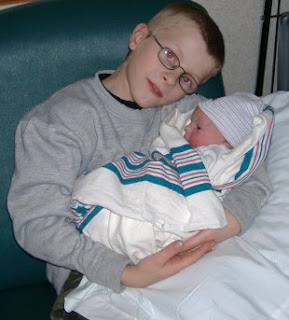 The handsome devil holding young Sean here (as a newborn) is Kane. Kane came to us when he was six years old, along with his twin brother, Donovan. Back then, Kane was tiny. Donovan was the dominant twin, and he was bigger, stronger, and cognitively less delayed. We were the boys' third foster home when we took them. Matt made that sound like noble self-sacrifice, but the deal with the boys is that their biological mother is my wife's cousin. I'm sure you all have at least one of "those" cousins, so I'll spare you the details. When the boys had to be taken from her, they went to her grandmother, then when she couldn't do it anymore, then to my wife's parents. We wanted to take them then, but we weren't even married yet--we were still in college living dorms without real jobs. The state wouldn't have allowed it even if we'd been dumb enough to do it.
When my in-laws couldn't take it anymore, they passed the boys to us--and by that time, we were married with a home and jobs. We went out and got a set of bunk beds and we were in business in no time. 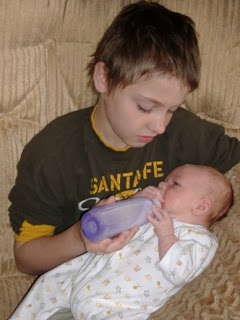 This guy on the left is Donovan, Kane's twin brother. This picture doesn't look like much, probably, but it is. It's a huge deal to us. You can probably imagine how hard it is to make connections and relate to other people when you've grown up the way these two have (and I've left the details of their early life vague on purpose, so feel free to ask but don't take it personally if I refuse to answer some questions.) Donovan has great difficulty with this partly because he was a lot more aware during the worst parts of their life. The boys used to speak their own dialect, which they created between themselves during long periods of isolation when they were learning to talk. It just sounds like a speech impediment now, but years ago it was a different language. They had their own words, and sounds were substituted. The syntax was more or less consistent, but it wasn't English. Donovan used to translate everything Kane said and just more or less take care of his brother in every way. Now he has a hard time understanding that he's not the unquestioned master of the universe whose whims are commands, but we're working on it. Anyway, this picture is from when Sean was about a month old. Donovan's picture is that much newer than Kane's because Donovan refused to hold the baby for the first month of Sean's life. He had even refused to look at sonograms. That first time broke something loose, and now he's Sean's big brother in every way.

Now, these kids have their problems just like anyone, and some of their problems are pretty extreme, but when you get down to it they're just three great kids. I appreciate the accolades from Matt and others, really I do, but there's nothing heroic about it; we just raise our kids.
Posted by Don at 8:14 AM

Email ThisBlogThis!Share to TwitterShare to FacebookShare to Pinterest
Labels: Kids

You may see it as "just raising your kids", but it's something amazing in today's society. If y'all lived closer, I'd be telling you to bring the boys out when we do kid-oriented BACA events...

"Just raising your kids" is something special, Don. Doing it with special needs children is even more so.

Far too many parents *don't* do it these days.

You may see it as "just raising your kids", but it's something amazing in today's society.

Wow--what wonderful folks you and your wife are. And that baby will do so much for the twins.

Even a hundred pounds lighter than he was, Don is a giant of a man. A Gentle Giant. He and his wife both have special training and talents in teaching Special Education kids, and Don cares. If I dragged out some stories of how he cares, you'd see what I mean. But I've told enough on him for the time being.

That Kane and Donovan ended up with Don and his bride is enough of a happy happenstance to make me wonder if higher powers were at work. The boys, bless their previously-neglected hearts, are where they need to be, and are learning to be a man by a Good Man.

If there is a single greatest deficit in this nation, it is the lack of positive male role models. Thank Gawd these boys' luck changed.

As for Sean, well, he's got it easy from the start. Heh.