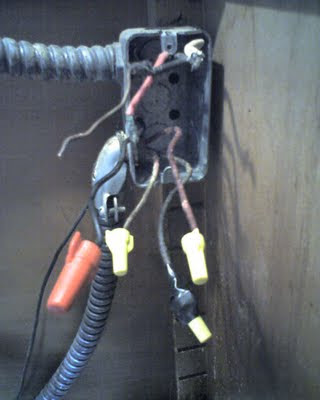 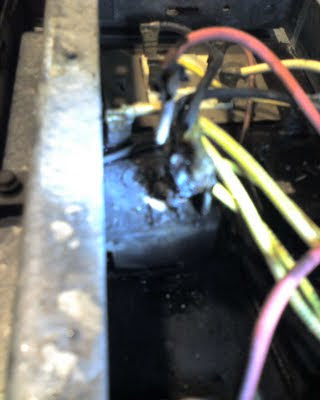 It's hard to see what's going on in this photo on the right, but this is one of the rheostat switches on the cooktop. This is where the smoke came from. One side of the plug is completely severed and the whole thing is covered in black, greasy crud. The cooktop was old and impossible to clean anyway, so I won't miss it. I just don't want to buy one, plunk it in and then watch it go up in smoke, too.
(I guess the advantage would be that parts should be available for the new one . . . as long as it doesn't burn the house down.

DO NOT wire any of the wires together.

You should have 4 wires in a 220 feed. white, black, green, and possibly bare or red.

Both the wht and blk are 'hot' bringing 120v in. the other 2 should be a neutral and a ground. the ground may be a bare copper wire, or in may have insulation depending on the wire, and codes in your area.

Best bet is to go to a hardware store, get 'wire nuts' in 12 gauge size. put one nut on each wire. They just screw on and are insulated. Then re-energize the circuit until you have to turn it off to connect the new appliance.

I re-read what you were asking.

IF the only wires in the junction box are the ones to the stove top, and IF you have them completely disconnected and the circuit still won't go live, you need an electrician or at least someone who knows more about electricity than you do.

Several things could be happening.

If you have more wires in the box than just to the pig tail on the stove.... you have an interrupted circuit.

If it is only the one set of wires, you may have a short somewhere else in that line.

Is the breaker throwing when you turn it on? or do you just not have power?

The wiring into the junction is red, white, and black, with a newer black wire run in as well (that one seems like it was added as an afterthought--it's run outside the conduit and connected to the bare wire from the cooktop. I did disconnect them and cap each one individually with a wire nut (the same one used to connect, but I figure capped is capped.

Looking at the photo, and from what you describe, I am afraid you will need someone actually there to figure it out. The 'extra' black wire is likely a ground.

AND, I think I told you wrong earlier, black and red are hot, white is neutral, bare would be ground.

It sounds like to me, the surge took out more than your cook top. Sounds like maybe you melted a wire somewhere in the circuit.

I was afraid of that.
Yes, you've got the layout correct.

The only good news in that is that if I have to pull new wire, it's not very far and most of it is in the open under the kitchen floor.

It's also possible you lost just one leg of the circuit.

I think you may need an electrician.

Either get someone that knows what to look for, or at least go get a book on wiring from home depot or something like that. It is too easy to burn something down or kill yourself if you do not know what you are doing.

Just for info, in house wiring:
Bare or green means equipment ground.
White is neutral
ANY other color is hot. (including black)

A strictly 220 volt circuit does not need a neutral, but should have an equipment ground.

I'd pull out what you have and run a new set through that conduit. You might want to replace the breaker also. Hopefully you have something somewhat modern. Also double check the cord connected to the stove. It wouldn't hurt to replace that also.

I'm going to do a quick primer on how the system SHOULD be wired, and what you are PROBABLY seeing, how to check it and what to do.

Check my blog in a little bit and I should have something up that will help you out.

I just re-read a portion of your post while concocting my ill-advised explanation.

I retract my ability to explain what's going on.


For this junction box to be having anything to do with any other outlets, there would have to be wires going from the box to those outlets.

Your picture only shows the incoming power wires from the Fuse box coming in from the bottom conduit and the outgoing wires to the cooktop going out of the top conduit.

There simply are no other wires that could be driving those other outlets.

If the outlets are on the same circuit, then they are connected at a different junction box and this one being disconnected should have no bearing on their operation.

Be sure to check the other breakers or fuses in your box...there is no reason to believe that the ones going to this cooktop circuit are driving the other dead outlets. If the lighting strike (or whatever it was) fried the cooktop circuit, it very well may have fried another as well.

Well, that's true, there are only the four wires coming in from the junction under the floor and the four coming out to the cooktop. I'm adding another photo that shows (sort of) the fried switch for one of the burners. It's blackened and melted and the copper plug was completely severed. I can't tell whether a surge caused the heat that severed the copper, or whether the copper corroded into two pieces and eventually made contact and arced.

Sooo . . . something certainly killed the cooktop, and Kenmore's part search doesn't recognize the model. But that doesn't mean the wiring is OK.

The only reason I thought the refrigerator and wall oven were on the same circuit is that they were both working until I pulled the fuse block for the cooktop. Then all three went dead.

My box is archaic, but a journeyman electrician declared it "ugly, but safe" a few years ago.

OK, here's a thought: There's another junction box under the kitchen floor. I'm going to go see whether anything leads from there to the wall where the refrigerator and wall oven are. Maybe there was an issue inside that box that's causing some kind of intermittent problem.

I've got a book, but I never know how non-standard my wiring is. When I re-do a room, I do it according to code. I'm pretty good at 120v layouts to run outlets and lights and the like because I've learned it from books and trial and error. But I haven't messed with 240v and it shows.

I do have a brother-in-law who's an electrician, but I hated to bother him with this. He's off working two hours away and only gets about a day a week at home.

but a 120v refrigerator definitely should not be on the same circuit.

Note the emphasis on "should".

Building codes are fluid...didn't used to need a separate ground wire, which is probably why yours is running outside the conduit. It was added after the original wiring...probably when the cooktop was replaced at some point in the past.

Although it's not a great idea for it to be wired this way (and counter to current building codes), it is possible that the fridge outlet is on the same circuit.

The power coming into your house is 240V. It consists of two, out of phase 120v lines and a neutral.

In the olden days, the neutral was generally connected to a wire clamped to the cold water line under the house. This grounded the system and that's all that was required. Building codes changed 30 or 40 years ago and now require a separate earth ground in addition to the neutral. That's why older houses tend to have two prong outlets while newer ones have three prong.

The two 120V lines both alternate in this manner, but 180 degrees out of phase. That means that at any given point in time, (except when they cross at zero) the two wires are opposite each other in voltage. When one wire is at +120V, the other is at -120V...for a total of 240V.

Your stove, being a 240V appliance, uses both hot lines to create the total voltage.

the 120V circuits use only one of the hot lines (doesn't matter which one) and use the neutral as the return to complete the circuit.

Technically, 240V appliances don't even need the neutral line connected. The opposing "hot" wires act as the returns for each other. The circuit is complete without the neutral.

The reason that 240V appliances have a neutral wire at all is because some elements in the appliance will operate on 120V versus 240V (Clocks, timers, lights, etc) and the neutral is required to complete the 120V circuit.

Basically, to hook a 120V circuit from that junction box, you would simply run a three wire cable from the 120V outlet to that junction box and connect those three wires to the white (neutral), the ground (green or bare...in this case, the ground is the black one that runs outside the conduit) and either of the hot wires (black or red)...it doesn't matter which one.

In the fuse or breaker box, the two incoming 120V lines are each connected to a bus. Each bus has a number of fuses or breakers attached to it and those are your 120V lines. Take one 120V line from each of those two buses and you've got a 240V line. Simple.

In breaker boxes, the breakers alternate between the two buses.

That's why 240V circuits in breaker boxes take up two breaker spots, even if it is only a single, double-wide breaker.

Dedicated 240V lines that were installed when the fuse box was installed (like the stove and oven circuit) generally have a dedicated 240V fuse that looks similar (if not identical) to the main fuse.

(to be continued...uber-comment wasn't allowed)

Anyway, in your case, I'd say that there's a good chance that the cooktop fried not so much as a result of the surge, but because that rheostat was dying. If you got any surge at all, it was probably just the straw that broke the camel's back.

The other outlets not working, though, is troublesome. They very well may be on the same circuit, but if they are, they aren't connected at that junction box. That means that you did not disconnect them by unhooking the wiring there. THAT means that they should have come back on when the fuses were reinstalled. The fact that they didn't means that either I don't understand how they're hooked up, or there is a problem somewhere else.

Be sure to check the fuses to make sure that they didn't blow as you were pulling or reinstalling them. If they're good, then you've still got a problem that you need to track down.

With the age of the wiring, it may be a good idea just to re-wire the whole shootin' match, as dneylon suggested, just to make sure.

Yeah, what Sailorcurt said, with one VITAL caveat: In any older house, don't assume the color-code was right; too many people don't know it but do electrical work anyhow.

Two hots in a (North American) 240V system, opposite in phase, which means "really don't connect them together," and often one has red insulation and the other, black. White should (see above) always be neutral and is the return wire for 120V circuits, for instance if the range has a 120V receptacle or light. Green (or bare) is safety ground, not a current-carrying conductor. (Ground and neutral connect at one and only one place, in your main electrical panel).