Recently, no fewer than four pro-gun groups cooperated to get two informational booths at the Black Women's Expo in Chicago for the second year. We're moving out beyond the gun shows now, folks:

"Anti-gun activists consider Chicago a stronghold. It's supposed to be their base of operations, the place where they can raise money, agitate the public to demand their anti-gun agenda, and rely on ignorance to keep everyone in line while they do it. "Dr. G" noted the effect a few key pieces of information could have: "Many people (maybe 50%) were shocked to find out that the police are not responsible for their individual safety, and that Illinois and Wisconsin were the only two states in the country without concealed carry laws in place." To pro-gun activists reading this article, that might sound like two trite soundbites everyone has heard a million times, but in Chicago, that's not the case. By bringing this information to people who would never have thought of attending a gun show or an IGOLD rally, these volunteers are putting down grass roots through Chicago pavement."

Read the whole thing, and if you like it, tell somebody!
Chicago GRE: Gun Rights Activists Reach Out At Black Women's Expo in Chicago 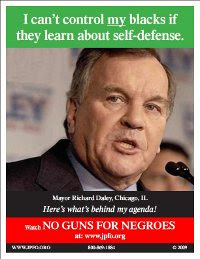 That is SO awesome!