That Was Fun! Part Tree. 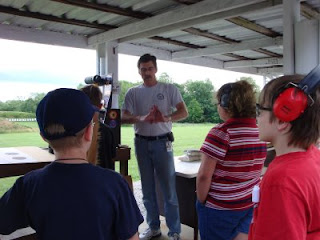 So, the morning was all kinds of fun, if a little soggy. The other CMP (Civilian Marksmanship Program) activity at Abe Lincoln Gun Club is the CMP Juniors program. It almost sounds too good to be true; the range is opened up to the public one Sunday evening per month during the summer (once a week in the winter) and all kids between 8 and 20 years of age are welcome, whether children of members or not. The club provides eye and ear protection, rifles, ammunition, targets and instructors for two hours of instruction in safety and marksmanship--and it's all free of charge. We had two instructors for eight kids, plus the parents. This photo shows my kids paying attention to the instructor, which is why I was in such a hurry to snap it. 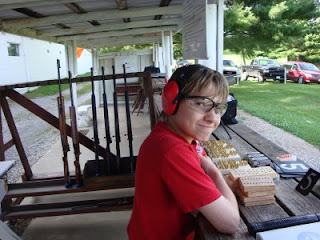 Here's Donovan showing off about as close as he gets to a smile. Notice the rifles in the racks--the black ones are .22lr Savages with very nice aperture sights front and rear. I never noticed what the other two were, but they were regulated for 100 yards and were dead on. Later, Donovan was able to sit at a bench and ding a hanging steel plate at 100 yards repeatedly with those. He'd have stayed there all night if they'd let him! Can you see the drilled wooden blocks to his left? The near ones just have twenty holes, but the far ones have five round clusters of ten rounds each--arranged in the same pattern as the five targets on each sheet the kids were using. They didn't need to do any counting, and they shouldn't have been able to forget which target they were working on, since they had to take each round from the cluster that represented that target. Pretty neat. 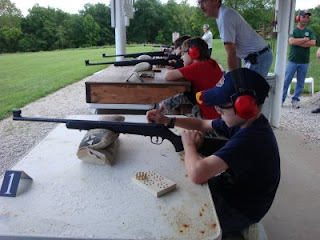 The Savage rifles were single shot, so the kids had to work the bolts quite a bit. Later, as they got tired, they began to hurry, but by then we were almost done. The instructors spent a lot of time with Kane; his vision is pretty bad anyway, and he's cross-eye dominant, so he kept switching between shooting right-and-left-handed. Both boys had a hard time remembering that their faces should be touching the rifle stock, but they did a good job overall. I was especially proud of their safe gun-handling skills. 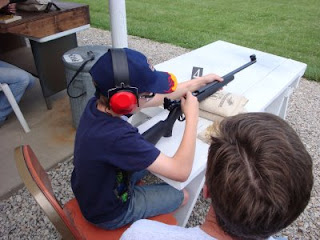 Here's Kane working a bolt for that follow-up shot. By this time he was attempting to stop a fierce, charging steel spinner at 50 yards. I was a little surprised that the kids all started out at 50 yards, but then, the guns were sighted for it.

Hey, did you think I was kidding about the rainbows? Not a chance. By this time in the afternoon, all traces of rain were gone. It was a beautiful blue-sky day with scattered fluffy clouds. And just as we were helping the instructors put everything away, I looked up at a perfect, complete arc of rainbow across the sky. Here's Donovan with one end of it: 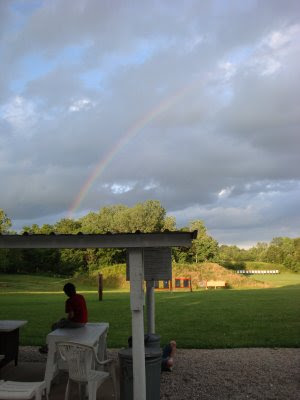 I'm not trying to get mushy here, Don, but you're an admirable man--in many, disparate ways.

AW, shucks. It's the rainbow, isn't it? Kinda gets you right here.

Great posts Don! CMP is an outstanding program, working with all ages. Glad you got a chance to let the kids get some good education and trigger time too!

Well, we sure had a great time. I plan to hype this program to my friends with kids, even the non-shooters, because I really think you could walk in knowing nothing about guns and they'd bring your kids up to a fun level in no time.