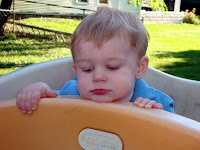 This weekend just sort of evolved into a lot of fun all on its own. I'm still not entirely sure what happened. Saturday we cleaned up the backyard a bit and mowed so we wouldn't embarrass our next-door neighbors at their barbecue. That barbecue turned out to be a lot of fun; we really don't see most people in our neighborhood, even people I've known most of my life. There were some good pictures to be had with our new camera, too--the neighbors have a little girl about 17 months old, whereas Sean is about 15 months now. 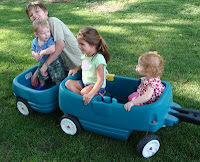 We left just a little bit early so we could make it down to the Litchfield Skyview to catch Prince Caspian. I hadn't been to a drive-in theater since I was a young boy. I was not really impressed with the flick, but it was cheap and we had a good time. The boys loved it, of course, since there were swords and armor and mice cutting peoples' throats. Lightning kept showing bigger and bigger black clouds rolling in until it began to rain, but with the four of us in the back of the van and the hatch up over the opening, we were surprisingly cozy. The baby was fussy for awhile, but he settled into his car seat with a bottle and went to sleep. We left around 11:00, declining to stay for the second half of the double feature, College Road Trip. When we got home, I snapped one more baby picture: 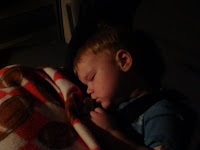