The High Road; An Apology To You All 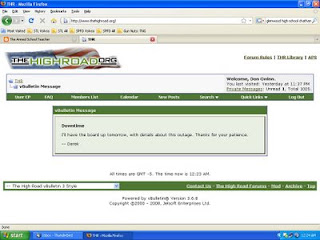 What? Prepare for another dumb-down, orchestrated by Jeff White and the Chicago gestapo, to prevent "cop-bashing" from reaching the fragile ears of the internet?

How about just deleting the entire forum, and directing EVERY user to APS? Yeah, that's the ticket!

Deal with your persecution issues on your own time. Then you can come back and explain to me who the Chicago gestapo at THR are or were, considering that I'm the closest staff member to the Chicago area, and I live four hours downstate.

I'm not going to bother with it here and now.

Could be, Oleg's just getting a taste of his own medicine?

For years, THR's official response to disagreement, has been: "If you don't like it, don't let the door hit you in the ass"...

Now, is the shoe on the other foot?

How often has a THR moderator posted: "There's plenty of other places on the internet you can go to!"

Takes alot of balls to insult as an anonymous post, eh, dopey?

I dont know the half of whats going on at High Road (I check it every now and then, thats about it) but I wouldnt worry too much. I hope you post some more, Don, for those of us gunnies who arent with THR. Im dying for an inside explanation.

That's a total bummer. I had just started to participate at TFL when it shut down, and moved over to THR shortly thereafter. I didn't post much, but there were several years there where I spent a lot of time on that board and even donated toward expenses. I've since spent less and less time on forum boards, and had no idea of any of this until today. I hope they can work it out, but the issue seems pretty belligerent from what I've seen so far.

Here is part of the explination: http://olegvolk.livejournal.com/474369.html

Well, if Blackburn likes it, then it is definitely bad.

Oleg and Derek lived together for a stint. They bought a car together (a convertible 3 series) and started a photography business (called 'Shoot the Rainbow').

Friends who know them well, know they were planning to wed in california. I suspect they're just having a temporary disagreement. They site will be back up shortly and they'll smooth things over between each other.