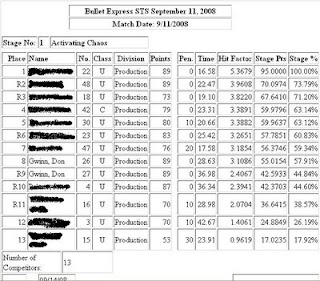 The week before, I was third overall (counting reshoots) and took first in Production. However, the first shoot of the month is always a classifier, and a lot of people simply skip them because they tend to be simple and not be terribly interesting. Not only did that stage require no movement and only one reload, but it stressed accuracy at a distance, which is one of my few strengths. Being totally honest with myself, I have to admit that even with the few Production shooters who showed up, I lucked out a little--I believe I was the only one who shot it without a penalty for hitting a no-shoot, and so if someone else had managed that, I have a feeling it might have been someone who shot faster than I did--and I'm starting to appreciate the importance of speed in this game. Points are never enough.

Take the 9/11/08 results above for example. Going by points, I'd have tied for first place. I had 89 points, same as the leader--I believe it was 16 A's and 3 C's, counting the steel as A's. That's pretty good shooting on this stage if I do say so myself; there's even a member at STS who calls me "Two Alpha" because that count gets called so much when I shoot. But what's this?

The two things I remember hurting my time the most were my reloads and the swinging target. The reloads are something I'm going to have to train and train. And unfortunately, only one of my magazines drops free from the P220. I needed two reloads to shoot this stage with my 7-rd magazines, which also makes me wonder whether others in Production were using 10-rd mags--the round count was 19, and it was very possible to make it through without a miss. I wasn't paying attention to what others were using at the time, but I did look at 10-rd McCormick magazines for the Gun Blog .45 on Saturday. Maybe I'll pick a couple up. Probably not for the SIG, though. I've never found any that were reliable. In any event, my reload technique is not down pat yet anyway, and it took even longer when I had to shift the gun to hit the mag release (short thumbs) and then reach up to rip the mag out with my support hand. I noticed that my hand was on its way to the mag holder when I changed directions and sent it to the gun; maybe I should have gone ahead and grabbed the next mag before coming up to strip the old one. Not sure if that would have helped. On Saturday, I tested my mags and made sure I loaded the one that dropped free first each time; that way, if I needed a reload, the first one should be smooth. Of course, I didn't need a single reload that day. Figures.

My other issue was the swinging target. This stage had three steel, followed by a mix of a turning target, a swinger, and six silhouettes plus a whole mess of no-shoots. Hitting the steel activated the turner and the swinger. I was most nervous about hitting the steel in the right order and getting to the turner before it disappeared, but I underestimated the swinger. It was between two no-shoots, and on both runs I hesitated and tried to time it. I should have picked a spot and let it come into the sights. It would have come through and back in short order and I could have been on my way. Instead, I hunted for it before settling in to wait for it, and I'm sure I spent several seconds each time.

So it'll be dry fire and reloads this week. Lots of it.

Next: The Armed School Teacher tattles on himself!

Adding you to Fred's Faves as soon as I post this...

if I had to use mags that stick, I'd work on getting into the habit of stripping them out with my off hand as I was moving my off hand down to my belt to retrieve a full mag. less wasted motion that way and you aren't fumbling around trying to load one mag while holding two.