Picture it: It's Sunday morning. It's 7:30. You are very nearly hopping from foot to foot as you stand in line for scrambled eggs and plastic forks; it's been a great weekend, and today is looking good. Tamara is looking for a place to lie down. Hardy is starting to look like he's going to make it after all; he must have slept last night. Through the other outside door, a group of men in uniform stride into the hall like Beowulf's band arriving at Heorot.

Some of them are large, bearish men measuring out long strides. Others are tiny bantam roosters sizing up the room as they swagger in. All are wearing the green "tactical" pants and tan "tactical" shirts that mark them as instructors, but the last man through the door--the only one who smiles and laughs--is also wearing a bunch of scars and a big, black eyepatch. I'd show you a photo, but I was afraid to take one. This artist's rendering gives the general idea: 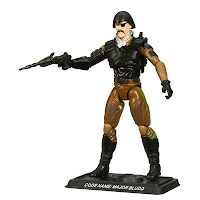 Anyway, Duke, Major Bludd and the rest of the Blackwater instructors get their food and sit down (far away from the low-speed-high-drag internet geeks, who must be a startling sight here this early in the morning.) One heads over to the jukebox and turns it on. It doesn't seem to matter which song he selects; the machine has only played one song since we arrived, no matter who played it or when. The weirdly empty space is suddenly full of sound:

Must be Sunday Breakfast at Blackwater.

I wonder why they chose that song in particular, I think Machine Head's Davidian would be more appropriate.