Sunday Skepticationalism Will Have to Wait 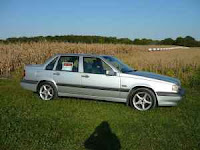 UPDATE: I didn't much care whether it was an R model or not, and certainly wasn't paying extra for it, so I was perhaps too casual about that part. There was no R model in 1994; the actual race car they were based on was campaigned in the 1995 season. It's just a plain old silver Turbo model. I will cope somehow.

I just made a major (for me) purchase, and now I have to go back across the state to where I was yesterday to pick it up. It's a 1994 Volvo 850 advertised as a Turbo model, but it's not.

And most importantly, it has a back seat and back doors, and I can put all three boys in the back, even with the baby's car seat.
"If you've ever purchased a sports car in a cornfield . . . it's just possible . . . you might be a redneck."

UPDATE: Oh, man, the sweetness. The sweetness envelopes and overwhelms. I wonder now whether a beneficent deity cast me into a Camaro so that I would understand this automobile in a way otherwise impossible, in the same way that a man must know evil that he may truly know goodness.

And now, random stuff that I swear people really said:

ME: "You know, guys, this car is faster than the Camaro, stops and handles better, and gets better gas mileage while it's doing it. Plus it has a nice big backseat."

Ahhh, you've bought a Volvo. The box a car comes in.

What kind of engine does the Camaro have that allows a Volvo to be faster than it? A Z-28?