Is It Paranoia If They Really Call You a Terrorist? 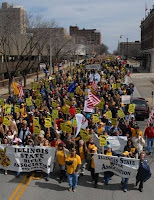 Low-level terrorism in Springfield, IL
I'm trying hard to be the voice of reason, here, but this is the kind of thing that makes it hard:
Days of our Trailers: Low Level Terrorism

Apparently, the DoD is teaching its personnel that "protests" are "low-level terrorism." No, I haven't seen a lesson plan or a presentation, but according to Fox News, the ACLU has obtained copies of a written exam with a question where the correct answer to "Which of these is an example of low-level terrorism?" is "protests." I've been a teacher for some time now, and I can tell you this: there are probably things being taught that aren't on the test, but it's very unlikely that there's anything on the test that's not being taught in depth.

The Defense Department defends this document in the Fox News story Roy linked by saying that it may be part of training for overseas personnel, and it may simply mean that protests are events to be avoided because they can be low-level terrorism in those other countries. I'm not really buying that one, but I suppose it's possible.

Seriously, are these people the terrorists?

Yes, everyone who defends the right to arms is a terrorist!

The brief conciseness of your comment, combined with the concise brevity, makes me suspect that I may not be dealing with Da Genuine Mayor. I think it's only fair that you provide some evidence that you are who you say you are.

Give my brother-in-law a job.

Er, um, let me say this, we need to manage, manage these schools . . . look, it's, um, the Republicans fault, we all need to pay more taxes, it's about the Olympics people and lining my pockets for my retirement with the construction kickbacks, GUNS! Guns are killing our kids.