Awhile back, I got an offer from the owner of a fairly new online source for knives and accessories. All I had to do was to put a small link to his site on my front page, and he'd give me a 50% discount on any item in the store. That's a pretty good deal, considering that my ads are worth so little that I don't run any (you didn't think I kept the site ad free to be nice to you people, did you?) He gets to pay a one-time "fee" in the form of a discount for an advertisement that, although it won't be seen by thousands of people per day, will stay up for a long time and probably be seen mostly by people who are likely to order a knife over the internet. If he spreads that out over enough blogs, he can get seen by a lot of people. And let's face it, I can't buy just one knife from anyone, so he was likely to make his money back from my business alone if it worked out. You might have seen the link--the two words "Hunting Knives"--on other blogs.

But I can't do anything the easy way, so I decided that I would place a small order first and see what I thought of the service. Since the twins' birthday was coming up at the time, I went ahead and ordered two identical Opinel camp knives imported by Coghlan's. 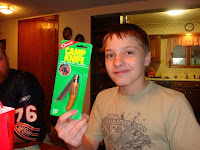 Those knives arrived promptly (that was months ago) in a padded envelope. The ordering system was easy to use and everything worked smoothly, which is what I really look for in a retailer. So if you look to the linkbar on the left, you'll see the Knives Infinity link from now on.

As for the knives themselves, I figure most of my readers are familiar with the Opinel design. McCann Industries has developed a swoopy "Foldair" folding knife with a gas cylinder taking the place of the spring in an axis/bearing-style lock, which they're advertising as the only locking folder on the market with no springs. That's not quite correct, actually, because the Opinel design, now over a century old, also eliminates the need for springs. The Opinel uses a rounded, lightweight one-piece wooden grip like any number of clasp knives or friction folders to grip a 1080-series carbon steel blade. It's tight enough to use the knife as a friction folder and never engage the lock if you don't mind a slipjoint. It's also tight enough to keep the blade securely closed with no springs; there's a traditional "nail nick" so you can open the thing with two hands (A folder to be opened with two hands? What will they think of next?) but old hands know that if you tap the end of the knife against something hard, like your head, the blade will spring out about an inch and can then be opened one-handed with the pinch method, the way people used to flip open Buck 110s. These knives are airweights; they feel light enough that one is tempted to see if they'll float, but I know for a fact that they will not. Don't ask me how I know.
I just know, OK?

The real point of interest on these knives, though, is the locking system, which is simple, yet very strong. The handle is round at the hinge point, and a steel collar is fitted around the wood so that it can turn. A slot is cut into the collar so that it looks a little like a c-clamp with a very narrow opening--just enough for the blade to pass through as it opens or closes. Once the blade has been opened, the user simply turns the steel ring so that the opening is no longer aligned with the blade. The angled edge of the ring engages the ricasso of the blade snugly, and the blade is solidly locked. Since the engaging surface is angled, like the engaging surface on properly-made liner lock folders, wear doesn't change the engagement. It's always solid (at least, I never managed to wear one enough to make it loose.) The lock is positive, tight, and very strong--slippage is essentially impossible, so you'd have to crumple or bend either the blade or the wide steel ring to get the lock to fail.

For awhile, Cold Steel offered their take on the Opinel, which predictably enough consisted of the same design but scaled up to "huge" and made with black glass-filled nylon instead of wood. It left me cold, especially since you can buy a brand-new Opinel No. 12 with the traditional wood made in France rather than in Taiwan or wherever Cold Steel was making them, and it will have a 12 cm/4.75 inch blade. Not huge enough? "Le Geant" is listed as having a 22-cm blade; that's over eight-and-a-half inches of blade as opposed to the Twistmaster's relatively puny five inches of "Carbon V," and the whole thing would be a little over 17 inches long when open. Kershaw had a version too, which looked a lot like a Finnish puukko (thanks for the correction, Tony!) when open. But it's telling that Opinel still sells these things as fast as they can make them, while Cold Steel and Kershaw have moved on to other things.

I took a look at that website. They clearly state that they offer international shipping and that they use USPS. A lof of US companies could learn something from these guys!

Is this Tony from Finland?

Heh, not exactly a big mistake to make. :)

And yup, that'll be me. Or, well, at least I go by the name Tony and I am from Finland - might not be the only Tony here though. :) I have used 'Tony from Finland' as a nickname, so sounds like we've met on-line somewhere?

You used to hang out at www.familyfriendsfirearms.com, didn't you? And maybe TFL? I remember you as the guy in Finland who played with all the cool toys.
:)

Yeah, that's me! I don't recall ever having all that many cool toys though... :)