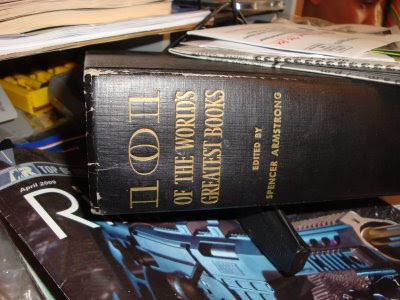 Notice anything odd there? She picked it up because it looked like an anthology of classics, which I'd bet is what it was supposed to look like . . . but notice how many classics. One hundred one? How many pages do you think are in this book?


Hmmm . . . . I think I'm beginning to
see how they managed it. Ten pages for Tom Jones . . . nine pages for Ivanhoe . . . and only eight pages for Anna Karenina. Now, I haven't read Tom Jones or Ivanhoe (yes, a blogger is allowed to admit that there is a classic book he has not read) but I really enjoyed Anna Karenina. What I'm having a hard time envisioning is how anyone could pretend to understand it when it's been cut down to eight pages in length. Tolstoy couldn't have written an eight-page description of poor Anna brushing her teeth without giving himself a stroke. How is this supposed to work? 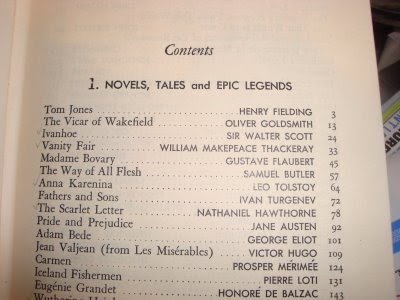 I recently re-read Fahrenheit 451. I doubt many of my readers have not also read this work, but the quick version is this: in a dystopian future, Guy Montag is a fireman who is paid to burn books instead of putting out fires. People live mad, frantic, unthinking lives where nothing matters except fast, loud, mindless fun. But Montag can feel something missing . . .
When I was a child, I thought it was a good story with the fatal flaw that the firemen were a heavy-handed contrivance; they made the story hard to believe, because they were so unnecessary. What were they there for? Reading it now, I realize that's the whole point. As Captain Beatty says, the firemen really aren't necessary; they just make big fires in the night as entertainment for the people who need that "real world" edge to their drama. The censorship of any real ideas that might put people off their appetite for bread and circuses is accomplished by the people themselves, who choose to ignore those ideas so the fun can continue. The ideas they ignore so studiously could be expressed on their giant televisions or their tiny seashell radio earbuds (the technological aspects seem a lot more prescient today than the last time I read this, too, as I mow the law with an Ipod and my neighbors are carting out the box from their new 194" TV.) The whole thing started, Beatty said, with dumbing down the literature, the drama, the cinema and the news to a sort of bland pudding.

Sounds like the socialist version of the intellectual, who only has a skimming knowledge of "popular" party talk-talk, just so he won't appear the total ignorant boor.

Anyway, with a book that thick, it looks like it would make an excellent downrange target backstop. Everything can be useful for SOMETHING. Nothing is ever totally useless.

How many pages is Atlas Shrugged? I guess the book is the antique version of "Cliff Notes".

I haven't looked, but I doubt Atlas Shrugged is in there.

On the other hand, many have said that Atlas Shrugged could have benefited from losing a few hundred pages . . . let me check.