I'm a Goofball But I Love You 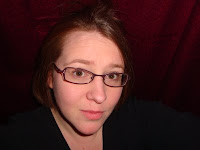 Nine years ago, this gorgeous creature took the plunge and got married. It hasn't always been a lot of fun to be married; her husband can be demanding sometimes, and dangerously immature at others. That is not hyperbole; sometimes his immaturity involves accelerants and explosives. Her children can be more than demanding; it takes amazing patience to deal with them day after day and still find a reason to cherish them every once in awhile. But if you've looked closely at this self-portrait, you might have noticed that her expression could be interpreted in a number of ways. She may have been going for a naughty librarian pout, but anyone who looks closely at the eyes and notes the arch of the eyebrows might note surprise, shock, and perhaps a note of apprehension about the future. It's an intriguing window into the soul. But what could she have seen that would put that hunted, harrowed expression on such a pretty face?

I think it's simple, really. Today is her ninth wedding anniversary. She has been married for nine years now, and the time has gone by faster than anyone expected, just as it always does. Next year will be ten years . . . and she never really considered herself a person who could have been married for ten years. But more than all that, at the true center of her disquiet, there is an epiphany, a realization, that seems in retrospect as if it should have been perfectly obvious all along. It's the kind of understanding that seems to dawn suddenly if only because we have been avoiding it by any means necessary until it was no longer possible. So what put that haunted look in her eyes?

It has suddenly washed over her as a wave washes over a toddler napping at high tide: she has not merely been married for nine years. She has been married to this doofus right here for nine long years, and there are long years yet to come. So many years.

I love you, My Bride. Please don't leave me for putting your naughty librarian portrait on the internet; nobody reads this anyway.

Email ThisBlogThis!Share to TwitterShare to FacebookShare to Pinterest
Labels: Love

Man! I knew that I should have deleted that picture. You would have thought that after 9 years of marriage and 13 years together that I would have learned by now. Love you forever and always...

Being married to someone who gets you is the best thing ever. Everything else is just window dressing.

Marko beat me to it. Happy Anniversary!

Esperanza, remember it's just us "nobodies" that read this anyway!

Great going, hope to see a similar post in another nine, or ten, years!

Please tell us what she saw in you!, You are a lucky guy! cograts.

Happy Anniversary to you both. I claim that my wife married me in a weak moment and has been too stubborn to admit it since. After 28 years she has a lot of stubborn.

Esperanza: this is why Nancy Reagan told everyone to "just say no"... ;)

Congratulations and happy anniversary to you both!

What Marko said. And from one lucky goofball to another, congratulations!