The Camaro, She Torments Me 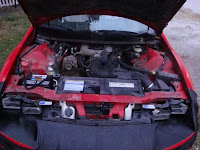 don't overlook the google-ness of pump, shaft and lubricated.

I'm replacing a waterpump on my truck this week myself.

It's all so very wrong.

I'm not back online because I finished and decided to have a beer, dear internet friends. I'm back online because the power steering pump bracket has to come off before the water pump can, and the entire set of directions in the Haynes manual for that removal are, I swear to Allah:

(Right, but the TITLE of this section is "Power Steering Pump--Removal. If I didn't know that much, I couldn't even have looked it up in your stupid book. HOW do I remove the bracket? I've now removed six bolts, one of which was not visible until I made a pretty close inspection, and the thing isn't budging. Save me, Google!)

Found it! There were TWO bolts hiding behind the coil packs. So, if you're keeping score at home, here's what you have to remove to change the water pump on a 3.4L V6:

The good news is that the buyer stopped by while I had the thing in pieces, and he wants it. I figure anyone who can roll up on that scene and still make an offer is in the right frame of mind. But, hey, he knows he won't have to replace a water pump anytime soon, doesn't he?

Don,
Reminds me of the '68 Galaxie I had while in college. Had to remove the right front fender to replace heater hoses.